“While browsing for old Nikon lenses in antique stores in Long Street, Green Renaissance met The Collector – a man with a real passion for cameras. He has built up a collection of more than 1000 cameras over the years. We were lucky enough for him to invite us to his home (not open to the public) to view his impressive collection. He reaffirmed how important it is to do what you love.”

Sigur Rós has announced an upcoming project titled “Mystery Film Experiment,” which is a collection of music videos for the album, Valtari. Each video made by different ﬁlmmakers. “With the ﬁlms, we have literally no idea what the directors are going to come back with. None of them know what the others are doing, so it could be interesting.”
“ Fjögur Píanó” was written & directed by ALMA HAR’EL.

Although I really liked the video above, the winner of this “Mistery Film Experiment”, per se, is the Skinned piece, created by Hong Kong-based photographer Ken Ngan, visual designer Dio Liu, and animator Anafelle Liu, features a faceless man shaping his own form, played by Adrian Heung. It seems that the harder he tries, the more of a mess he creates, ending up with burnt and melting flesh falling from his body. As a viewer, you are right there with him, cheering him on, anticipating his next move, and finally feeling his frustration and pain.

Creators Project: Skinned is a minimal yet emotionally powerful film. Where did you get your inspiration from?
Dio Liu: I remember Ken [Ngan] once randomly brought up a video called Transfiguration, a stunning body art performance piece by Olivier de Sagazan. The tension and anxiety in it is really penetrating. We wanted to generate the same intensity of struggling but in a relatively serene way. To us, Sigur Rós’ music is always introspective. It’s like it creates a spiritual space inside us in which we feel safe. Safety not quite in the sense of being covered, but the reverse—it’s like an inner space in which you are naked and so you can confront your own naked self. So for the video, we wanted the energy to be pointing inward rather than out. My first thought was body modification—things like cosmetic surgery, bodybuilding, and all that. Those transfiguration techniques are nothing new, but the ideology behind them is always changing.

What was the creative process like? Did you know exactly what the end result would look like, or did it sort of just come together?
It was a rather organic process, almost like a sculpture that completed itself. As previously mentioned, the project was initially a reflection of body modification, for which I drafted a set of symbolic movements. After that our choreographer, Cliff Huen, insisted that we don’t dictate Adrian’s moves since he’s not trained for that. Instead, we just let him go. It was an interesting process. Most of the time Adrian was performing with his eyes closed. Cliff directed Adrian’s movements much like he was hypnotizing him. Sometimes Cliff illustrated an imaginary scene for him to go from, sometimes violently provoking him, sometimes calming him in a soft and comforting voice. When he was performing, the atmosphere in the studio seemed heavier. If I were Adrian I’d probably have gone mad.

What was the hardest part of making Skinned?
The production itself is quite simple, as you can tell. We didn’t have too much budget to make it more complex. So the difficulty was all on Adrian really. We didn’t expect that it’d be that harsh for the performer because he’s an athlete with a trained body. For the texture and thickness that we were going for, the dough ended up being too dense and heavy. I’ve known Adrian since we were 14, and I’ve never seen him exhausted like that, not to mention the mental exhaustion we put him through. He kept silent the whole night after the shoot. I’m glad to know he didn’t need to see a psychoanalyst afterwards.

Before it went to editing, I was a little worried the video would look too heavy and intense for a Sigur Rós track, but Anafelle did a great job with it. It ends up that blending of visual and musical elements increased the depth of both. The way she handled the pace and rhythm retained the intensity of Adrian’s movements and also brought out the introspective quality of the track. All of us grew up on Sigur Rós’ music. Some of their songs mean a lot to us. Their music was the reason behind a trip to Iceland Anafelle and I took years ago, which was really important to us. You really can’t imagine how happy we are that the band picked our video!

“Why are you sad?”
“Because you speak to me in words, and I look at you with feelings.”

Oh man, it’s one of those days.

The photographic work of Tajette O’Halloran is narrative rich.  Each image seems stolen from a story in progress.  The photographs borrow filmic qualities not only in its storytelling  but style lighting and composition.  Indeed, O’Halloran had spent time as a location scout for Australia’s film industry.  She’s kept her eye for location and sense of drama.  The self-portrait series featured here is set in an abandoned house in Barre, Massachusetts.

O’Halloran relates of the experience, “While staying here in this environment I felt compelled to create a photographic story of captivity, abandonment and surrender. I wanted to explore the fragility, torment and eventual freedom of the mind  when left alone with yourself and your thoughts.”

“”I didn’t think it would turn out this way” is the secret epitaph of intimacy. To intimate is to comunicate with the sparest of signs and gestures, and at its root intimacy has the quality of eloquence and brevity. But intimacy also involves an aspiration for a narrative about something shared, a story about both oneself and others that will turn out in a particular way. Usually, this story is set within zones of familiarity and comfort: friendship, the couple, and the family form, animated by expressive and emancipating kinds of love. Yet the inwardness of the intimate is met by a corresponding publicness. People consent to trust their desire for “a life” to institutions of intimacy; and it is hoped that the relations formed within those frames will turn out beautifully, lasting over the long duration, perhaps across generations.”

[translation] It is a recurring question in my life: “What place did you enjoy most?” Others do it and I do it myself. Sometimes I struggle with the answer “It depends. Which I liked more for what? For dating? For aging? For staying long, for a quick sightseeing , or imagine myself raising a family?” There are many answers to the place that I liked the most to visit. But often, in jest, I say, “The next one.” 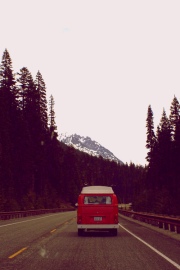 “This summer has been spent mostly traveling and working on personal art pursuits through sketchbook entries and photography. In the past two months I ‘ve been through about 20 states and hopped freight trains over 2,500 miles. Traveling is the best way I’ve found to liberate myself from the illusions of my own small life. In certain ways, I’ve learned more spending nights under an overpass talking to an old rambling man than in classrooms. To grow as an art maker, I must grow as a person. To grow as a person, I have to toss myself into the unknown!” PP via beautiful/decay